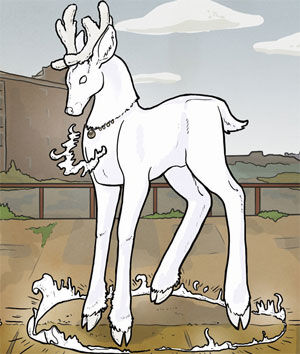 White Stags are, as the name suggests, pure white male deer. They have longer legs than regular deer and are slightly larger in general. Mature stags appear to have a glowing light not unlike a small sun radiating from between their antlers.[1] In Celtic mythology they are said to be messengers from the otherworld, and are said to act as guides or symbols for a great adventure or quest. They are also said to be notoriously difficult to capture.

How much of this is true remains to be seen, as there has only been two white stag depicted in Skin Deep, Blanche Noir and his father, and if they possess these qualities, they haven't been intentionally brought up.

White Stags would seem to have magical powers, although it is unknown what form these take.