Royce Carmikal (aka "The Fool") is a Pygmy Gryphon. He is usually seen with his two friends Jack and Phoenix. Not much is known about him, and he likes to keep it that way; he finds it fun to have people guess about him. His body is covered with tattoos designed after John Lennon's 1965 Phantom V Rolls Royce; he even has his tattoos on his wings, but he never gives a straight answer when asked how he got them there. It is unknown if he calls himself "Royce" after his tattoos or if he got his tattoos because of his name. He often likes to shift various parts of his body from human to midform. He has a bad limp, causing him to walk with a cane.

Royce is the owner of a shop called 'Electric Voodoo Tattoo and Curio', which may explain just how he got those tattoos.

Royce was created by Sfé Monster. 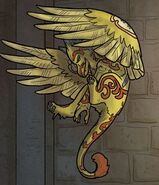 Royce in midform
Community content is available under CC-BY-SA unless otherwise noted.
Advertisement