Michelle Jocasta is the main focus of the Orientations story arc. She is the only known, and believed to be the last, Grecian Sphinx in existence.

From the Orientations Character Page: "The main focus of Orientations. Completely unaware of the secret mythical culture under her nose until she suddenly turned into a big cat/bird monster thing, Michelle is struggling hard to come to terms with all the crap that's been thrown at her in a very short amount of time. Between turning into a creature that's supposed to be extinct, discovering her new friends are all monsters, getting attacked by demons and dragons for unclear reasons, and trying to decipher cryptic messages from her dead father who's haunting her dreams, Michelle isn't really having a great time here."[1]

From the One-Eyed Bear Character Page: "Michelle's growing collection of good luck and protection charms has made it difficult to grab her outright, so the demon Mikhail Grim came up with a plan to grab her in a round-about way. Not only did Mikhail's plan not work, but Michelle was the least-effected by the night's events. Way to suck, Mikhail." [2]

Michelle grew up in a small town in Missouri with her mother Janice and her father Michael. She had very few friends (if any) from her home town, and rarely talks about her life before college. Her father died suddenly of a brain aneurysm when she was very young. She appears to have inherited her species through her father's side of the family, but it is unclear how exactly that came about. Not much is known about Michelle before her attendance at Southwest Missouri State University. It is implied that she is the only known Grecian sphinx in existence, as the species was supposed to have gone extinct during the Great War.

Michelle is the main focus of the Orientations story arc, and the comic follows the events leading up to and immediately after her turning. She discovers that not only is she not human, but neither are any of her new friends, and she is weird even by their standards. She does not take any of the news well, especially when she starts getting chased around by monsters, demons, and dragons, who all seem to want her for undisclosed reasons. She's not at all happy with her predicament, but she feels like what has happened to her has happened for a reason, and she has determined to figure out what that reason is.

Even though Michelle is the target of Mikhail's Nightmare during The One-Eyed Bear, she escaped the evening relatively unscathed. This is perhaps because of her ever-growing collection of good-luck charms, which has made it hard for the demons to grab her. She dressed as the Riddler for Halloween, a possible nod to the Sphinx's legendary proclivity for asking riddles and her changing attitude towards her true form.

Physically, Michelle looks quite a bit different in Ridiculous Creatures than she did in Orientations. Her face is more elongated and her hair has gotten a little longer, and she shows curiosity about the mythical world (even if Jim is perhaps not the most mature person to ask for answers).

Michelle is attempting to tell her mother about her mythical creature status.

Michelle has stated that her senses have become much sharper since her turning, with sharper eyesight and a better sense of hearing. She also has the ability to fly thanks to her wings.

Since Michelle is the only known Grecian sphinx, it is unknown exactly what her magical abilities are, outside of the fact that she has them. She appeared to have teleported herself miles away from her dorm room during her turning, and she was able to heal Jim of the injuries he sustained during his fight with the MoMo. She also managed to banish demons from the mortal plane, but all of these abilities came out during great times of stress, and if she has managed to repeat the abilities she has not mentioned it. It is possible that she can detect if someone is looking at her (or demons) as her eyes glowed and she quickly turned around when one of them stared at her through a window. 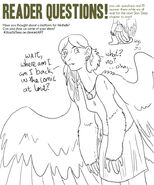 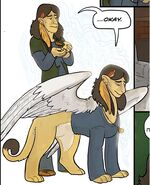 Michelle transforms for her mother