Petrus Isaac Sanford is a Crossbreed; his father is a Manticore and his mother is a buggane, a shapeshifting water spirit whose kind likes to take the shape of a horse. Other sources say bugganes are sorts of bogeymen, with wild hair and impish personality streaks.

Because crossbreeds are rare and people distrust manticores, people tend to judge Ike rather harshly. Ike is considered a Monster because he does not have a medallion, but because of his buggane heritage he is a natural shapeshifter, and can naturally shift from human to midform to fullform.

He tends not to shift into his fullform because his shifting is a physical transformation; it is somewhat more difficult,his clothes get destroyed and it hurts. Manticores have venomous barbs on their tails that are fatal; because Ike is a half-breed, his barbs are not deadly but they are still venomous, so he keeps his tail wrapped up. Ike is good with electronics and likes to tinker in his free time. He is part of the band The Boney Kings of Nowhere.

While he is abrasive with many people, this is partly due to the distrust others have of his hybrid nature, and he can be pleasant when the mood strikes. He may have issues with his mother, who considers him a burden and dotes on his younger half-brothers who are both full bugganes.

Ike was born thinking himself human and transformed into his present state between the ages of 16 and 18 (June 1995). His transformation was described 'terrifying and painful'. He also had no knowledge of the mythic world before this, as his mother raised him as a human.

Ike has bright blue eyes and pink fur, with darker, reddish hair and beard. He also has hooves and fin-like protuberances. As a human, it can be seen that he had darker skin and brown hair - still the same eyebrows, though. The only change in them was colour.

Interestingly, the human form of Ike differs between his Turnaround Sheet and his appearance in comic. This may be a result of his transformation changing his human appearance, or simply a design decision on the part of Kory (The artist) or Sheana (Ike's creator).

His parents are Lynn and Horace (Step-father).

Ike was created by Sheana Molloy. 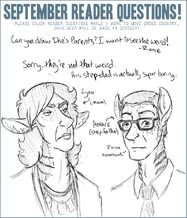