A female-only race of bird-women that are classified as monsters. Abbie, who runs the nightclub with her husband, is a Harpy.

It's been suggested that Anthony may also be a harpy, despite him being male, since there seems to be strong enough magic involved with his transformation to break the natural rules.

According to Madam U 's description, this subspecies of harpy is known to have wing-arms.

Abbie is an Okepetian harpy and has six limbs: bird feet, humanoid arms, and feathered wings.

These Harpies appear to have human faces but bird-like bodies.

These harpies apear more monstrous than other harpies and have bat like wings. 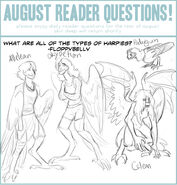