in Chinese and Korean mythology.

Only one Haetae has appeared in reader questions, a korean One.

According to Korean records, Haetae's body is shaped like a lion and has a horn on its forehead. It has a bell in its neck, and the body is covered with scales. It lives in the frontier areas of Manchuria.

Seoul city has officially used Haechi (origin of Haetae) as the symbol of Seoul since 2009.

In English, it is called "the Unicorn-lion". 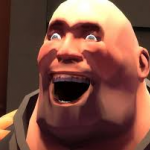