Gryphons (alternately spelled griffin or griffon) are one of the most numerous mythical creatures encountered in Skin Deep. They are an expansive race with many different subspecies, but they are all joined by the common physical characteristics. Namely, they are hybrids of some sort of feline with some sort of bird, most often a lion and an eagle.

As the name suggests, common gryphons are the most common species. They are "traditional" gryphons: half eagle and half lion with the eagle half up front and the lion half in the back (see picture). They also have "ears" of tufted feathers, which do not grow in fully until maturation. Common gryphons are also the oldest species of gryphon, having direct ties back to the Middle East.

Uncommon gryphons are gryphons that are not half-lion/half-eagle combinations, but instead some sort of cat/raptor (the bird, not the dinosaurs) combination. These are much less common than other sorts of gryphon, (hence the name) but it is not unusual to find them in bigger Avalons.

Opinici (more commonly "maned gryphons") are closely related to Common gryphons, but they appear to have more lion characteristics, such as lion forelegs and lion ears. The males, as the name suggests, sport a lion's mane, while females, like lionesses, do not. Opinici are seen most often in Western Europe, with a large family (The Finns) located in Northern England.

This species is available for purchase as a Medallion.

Inverted (or "reverse") gryphons are gryphons that have the foreparts of a lion and the rear-end of an eagle, a "reversal" of a traditional gryphon. As such they do not have wings and cannot fly, which makes them sort of the butt of jokes in most gryphon circles. Inverted gryphons themselves do not feel this way, however, and are proud of their species.

Pygmy gryphons are a sort of "catchall" term for gryphons that do not easily fall into any other groups. The group includes both uncommon gryphons that are a mix of some sort of feline plus some sort of bird (outside of raptors, like hummingbirds or songbirds), and also gryphons with physical characteristics that are not recognizable as a specific cat or bird (and more just general "some sort of bird" and "some sort of cat" characteristics). The name "pygmy" comes from the tendency for these gryphons to be smaller than other gryphons (the smallest recorded gryphons are hummingbird/fieldmouse pygmies, for example), although this is not always the case.

Alces (also called "Keythongs") are wingless gryphons. They resemble common gryphons in every other way.

Gryphons do not seem to possess any natural magical powers. They are long-lived, however, easily reaching the age of 200.

Jim Finn is affected by what he describes as a "Family Curse" that has supernaturally affected both his mane and body-length. His mane is much longer than most opinici and green (an unnatural color), and it grows back immediately after it is cut. He is also much taller and longer than any of his family members. Not even medallions can hide the physical effects of the curse; as a human Jim has very long green hair and is close to seven feet tall. While no other gryphon has been specifically stated to have the Curse, Colin's tail-tuft appears blue, which does not appear to be a natural color. However, it is mentioned by Kory that it is, indeed, a family curse, so it has happened before. 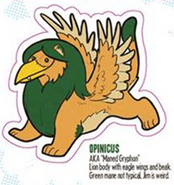 An Opinicus (Jim), taken from the "Know Your Gryphons" Sticker Sheet 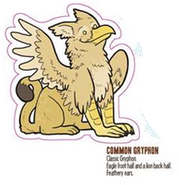 A Common, taken from the "Know Your Gryphons" Sticker Sheet

An Uncommon, taken from the "Know Your Gryphons" Sticker Sheet

A Pygmy, taken from the "Know Your Gryphons" Sticker Sheet

A Reverse, taken from the "Know Your Gryphons" Sticker Sheet 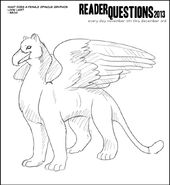 An example of a female Opinicus
Community content is available under CC-BY-SA unless otherwise noted.
Advertisement