Bugbears are a bear-shaped form of hobgoblin. They appear in dark colors, with glowing eyes and long claws. They seem to have an affinity for creepy-crawlies, and for scaring people.

The B is for Bugbear entry states: "Bugbears are a type of English hobgoblin that resemble enormous bears with glowing eyes. Not actually dangerous,bugbears track down runaway children and frighten them into returning home."

The artist also states " Sheana and I have expanded on the bugbear mythos a bit for my Skin Deep project since Alec Hyde is a bugbear, adding things like naturally attracting arthropods, the ability to find certain people no matter where they are, and Just Being Damn Creepy In General."

As can be seen in these pictures of Myra and Alec bugbears are considerably larger in Full Form compared to human form and midform.

Bugbears seems to have some ability to use illusions for the purpose of scaring others, as well as 'creating' creepy animals such as Bats (Myra) and Tarantulas (Alec).

Bugbears have the innate ability to find people but can't find inanimate objects unless that object is being held by an organic being. One noted limitation of this ability is that it cannot be used on other bugbears. They can however, use the fact the Bugbears would appear to be 'gaps' in their personal radar to determine that a person they can see is a bugbear, as every other person/creature would show up normally. It would seem that angels are also invisible to bugbear 'radar' as Myra cannot sense the presence of Gabe, despite him/her sitting a few feet from Myra.

It is suggested on this page that Bugbears can sense if somebody is altering an image of them and respond to this with illusionary or fire based attacks.

Lily, referring to previously vandalising a poster of the The Boney Kings of Nowhere,states "The last time I did that the paper burst into flame and screamed like a dying rabbit"

The author herself tells us that "Despite being fairly solitary creatures, bugbears have a rich cultural tradition that a large majority of them follow. Most bugbears are raised by a single parent, as it is the norm that one parent will leave shortly after a child is born. Under most situations, if the child is female the mother will keep it, and if the child is male the father will keep it. The childless parent will then usually go off to find another relationship and have another child, while the parent that keeps the child will usually not seek out new relationships and focus on raising the child. Because of this, a large number of bugbears have half-siblings, and that mixed with a bugbear’s usual solitary nature has resulted in bugbear families keeping pretty detailed family trees to keep track of everybody (nobody wants to get in a relationship only to find out that you’re related to them)." 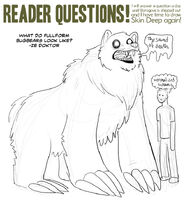 Myra discussing bugbear radar and Gabe not appearing on it