Blanche Noir is a young White Stag with long hair who lives in Liverpool, and whose best friend is Anthony. He has some experience as a drummer and is currently filling this role for the Four Horsemen.

Blanche was created by Sfé Monster. He is available for purchase as a Charm.

From the Exchanges character page[1]: "Blanche met Anthony Gillis in grammar school and the two have been best friends ever since. Keeping the fact that he wasn't human from his best friend ate at him for years, until he finally decided to reveal himself to Anthony. To Blanche's relief, Anthony seemed to be taking the news well, until Anthony started transforming into something inhuman. Blanche promised nothing weird would happen to Anthony, and now he's falling over himself to try to set things right."

His favorite movie is Disney's Bambi, and his cell phone plays "April Showers" when it rings. He seems to have an infatuation with the punk or goth aesthetic, and his wardrobe and accessories show this. Blanche can, in his own words, "play a mean Marky Ramone" on the drums.

Blanche reveals to his best friend Anthony that he is actually a White Stag, after a rather humorous misunderstanding since Tony thought Blanche was trying to tell him he was gay (which Blanche is not, and becomes rather annoyed). He then invites Tony to visit his home in the Liverpool Avalon, a hidden community of mythical creatures. Anthony seems to be taking it well at first, but after visiting Madam U 's shop and taking a medallion test, the strangeness seems to take its toll on Tony and he leaves. Blanche is heartbroken about this. As he's being consoled by Eleanor, Tony calls him in a panic. It seems something odd is happening to his best friend.

Blanche runs to Anthony's house to discover his friend's slowly started transforming. Not knowing what's going on, he's rather panicky, and takes him back to the Avalon to try and figure out what's going on. They first visit Madam U's shop, but she doesn't seem to know much besides the fact that he appears to be turning, into possibly a harpy. She suggests they ask Tim, the local sorcerer.

Tim can only guess that the medallion Tony handled at the shop may have affected him in some way, and he'd need time before he could look into a way to fix it. Meanwhile, Tony is not taking the ordeal well at all. He slowly finishes transforming into what appears to be a harpy. Blanche doesn't quite know what to do, and tries to cheer Tony up by suggesting he could learn to use his new wings to fly. Tony lashes out at Blanche at that point, blaming him for everything that's happened, and telling Blanche he has no idea what he's going through, and to leave him alone. A saddened Blanche leaves Tony at the nightclub bar.

Blanche asks Ike to talk with Tony for him in order to calm him down and apologise to him while he played as a drummer in the Four Horsemen (having been forced by his parents to get a job and having asked to Paul if he could join the band). Despite Ike's best efforts to cheer Tony up, he only succeeded in making them both depressed when they realised how flawed the life in Avalon can be. When Royce challenged Jack to a Bar Bet, everyone left the bar to watch their contest. Blanche bet on Royce, but he lost to Jack. Fortunately he noted that Tony was liking the fight and managed to make peace with him. While still holding Blanche responsible for his condition, Tony understood that Blanche just wanted the best, thanked him for trusting his secret with him and vowed make the best that he can on his shape, while Blanche, in turn, vowed to make Tony become human again, no matter what.

Tony has been staying at the Noir house and manages to injure himself attempting to cut his feathers, mistakenly believing they are like hair. Blanche's mother explains the difference as she removes the damaged feathers to allow regrowth. Later the two go to Stereophonic, a local music store, which Tony finds is unfortunately staffed by Alec Hyde. Alec, amid bantering with "Birdie," informs him that while they've got nothing in stock for him specifically, he might be able to play a regular guitar with practice— or they could do a custom job, something Tony cannot afford. Blanche's offer to "cover" him triggers Tony to remark that he's "done enough for [me] already" and he attempts to leave the store in a huff. When they reach the outside, Blanche describes his offer as an attempt to say sorry "so that you'll believe me", but Tony doesn't want to talk about it; Blanche eventually lapses into sad silence.

Upon returning to the Noir house, Adelle informs Tony there's someone here to see him- his mother Ophelia!  After convincing Tony to come out from hiding and noting that he's trimmed his feathers, she begins to reveal Tony's past to him.

Blanche possesses a natural magic, but the specifics haven't been touched upon yet. 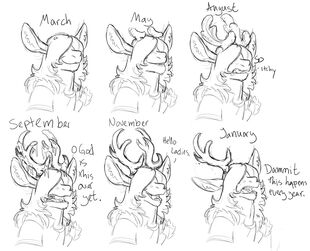 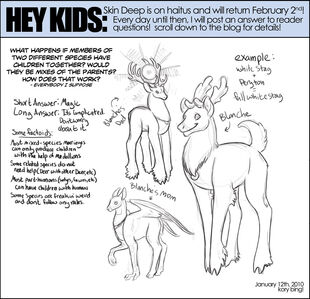 Blanche and parents in full form
Community content is available under CC-BY-SA unless otherwise noted.
Advertisement